Provisional Painting is a relatively contemporary article written for Art in America by Raphael Rubinstein. I read the article in an attempt to understand what Rubinstein suggest is something of a motif he is noticing in a lot of contemporary painting. He mentions five artist, Raoul De Keyser, Albert Oehlen, Christopher Wool, Mary Heilmann and Michael Krebber. The common string between these painters is that their work looks purposely unfinished, or self canceled.  Rubinstein goes on to say that the reason for this has to do with “an index of the impossibility of painting and the equally persistent impossibility of not painting.” Essentially, I think he is suggesting that painings history is so verbose that painters are reacting to it with provisionality.

I have been working on this painting for around a week and half. The painting was inspired by a wide array of artist, Giotto, Henry Darger, and Edvard Munch to name a few. Something I really wanted to play with in this painting was representational flatness. I’m interested in flatness for a few reasons, but mostly find it interesting in how it can be used to create a world that obeys different rules then the real one, A painting world.  Gesture and brush work/movement are essential to making a form seem round in a paint. If your painting a upright cylinder, for example, the trained thing to do would be make horizontal marks that seemingly bend around the form. If you do the opposite, you’ll achieve flatness. Below I have two figure I painted, not how much rounder the girls face appears then the boys arm. The Girls nose is also a nice example. 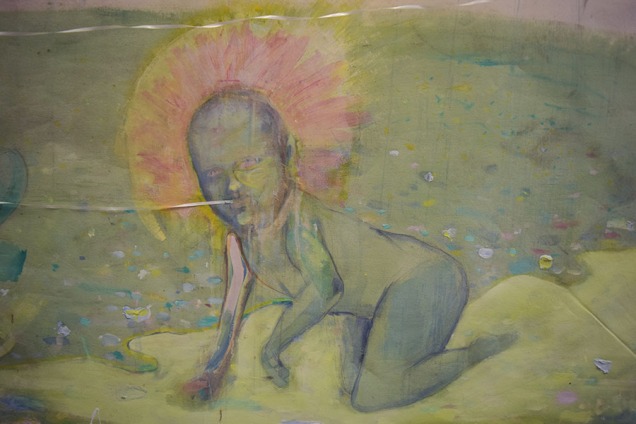 Cedric was introduced to the class as an artist who is adept at marketing himself. After seeing Cedric’s work I’m not surprised his paintings sell. His work is a lot prettier and more accessible than a lot of contemporary art. With that aside, it’s also clear that Cedric has drive and charisma. Cedric talked on the importance of branding yourself, and saying Yes to all opportunities. More than Cedric’s words he outputs a vibe or an attitude. I think what I learned that most from him is the importance of confidence, and understanding what you do has value. He seems to be anything but shy, when it comes to pushing his work, and it appears that he is more successful for it. 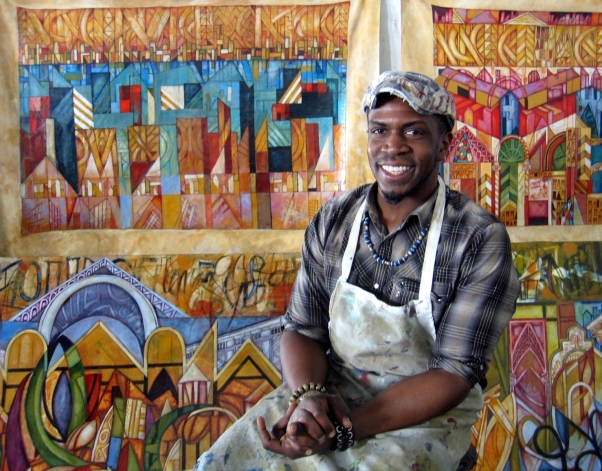 Any one interested in art in Cincinnati should be familiar with Cincinnati’s Contemporary Arts Center. The Arts Center was started in 1939, by Betty Pollak Rauh, Peggy Frank Crawford and Rita Rentschler Cushman. More history on the CAC can be found on their webppage http://www.contemporaryartscenter.org/about

Our class visited the CAC a few weeks ago. We spoke with the head curator Steven Matijcio. While Steven said his interest in art started from an art practitioner pov he was focused now primarily on his curatorial pursuits. Curation is not something I’ve ever been interested in, but hearing Steven speak I wondered why I had never considered it?

There where two shows on display at the Museum, the UC MFA show and Do Ho Suh’s show titled, Passage. While both shows were impressive, it was clear to me that Do Ho Suh’s work was more mature. It’s not entirely fair to compare an established artist to graduating students, but I think there was utility in trying to discover the rhetoric that Made Do Ho Suh’s work so compelling. His process and content seemed perfectly aligned, and while the work was at times felt cerebral it always felt personal.

On Shapeshifting is a stop motion film I started making earlier this winter. The film is a work in progress, but I thought I would write a bit on the “actors”

In stop motion I believe its most common to see three dimensional figurines or puppets as the characters; however, I wanted my movie to evolve out of my drawing practice so I chose to make 2d actors, and used a forced perspective to give the illusion of a third dimension. I think this is in the same vein as South park, though not exactly as I wouldn’t be shooting top down. Some of  the film makers that inspired me were: Ray Harryhausen, Tadahito Mochinaga, and Ishirō Honda.

The characters were all painted on drawing paper, then using a spray adhesive the paper was adhered to thin cardboard from cereal boxes.  To ensure the characters had a wide range of motion I held them together using velcro.  During the filming I had to place wooden blocks behind each character to stop them from falling. 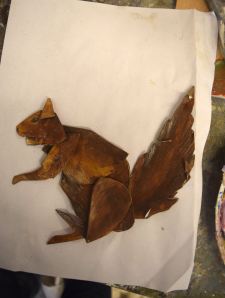 Love Spell
Watch Titanic 7 times
after the 7th viewing write
as much dialogue as you can remember
on a piece of paper
put the paper in a glass
bottle and throw it
at a moving train.

Lose Weight Spell
Say your name
twice a day
to a ligher. On
the 100th day
burn a tree twice
your height.
Use the ashes
as makeup (add saliva as needed.)

Well, the studio (pictured below) is a bit of a mess at the moment, despite just cleaning it. I’ve been working on some small paintings/poems. The original intention was to make these things into a book, but I realized they probably need more breathing space then a book allows. The “poems” are different for me, and in some ways outside of my comfort zone. I’ve been writing bad poetry for the past couple years but never have I written this casually, nor have I let the poem and art world meet. Yoko Ono, mentioned in the previous post is a clear influence here. While It probably looks like the poems are written on cardboard its actually a paper made from blending computer paper, soil, and plant fibers.

Yoko Ono seemingly gets a bad rap from the general public who blame her for playing a pivotal role in the Beatles breaking up.  At any rate, the Beatles are overrated (sorry), most of them are dead (sorry again), and Yoko Ono is alive today still making thoughtful and challenging work.

I first came across Yoko Ono’s work in an exhibition on Fluxus at MOMA. On Display were some of her Tape Pieces. I was struck by how clever they were, without the pretension or cutestyness you often see in work described as clever. They felt sincere, profound, poetic, and optimistic. The “piece” in her works often rings as “peace.” Her work isn’t critical in the way a lot of artist are, but rather she plays to the positive potential of the human experience.  Mend Piece [1966/2015] currently on display at Galerie Lelong, for example, is an interactive work where viewers are encouraged to piece together broken ceramic cups together, In an interview at the Brooklyn Rail Ono is recorded saying,  “…I realized that actually, in mending a cup, you’re mending the planet, mending the universe. It’s a great thing. You are just mending—but you’re mending all those things, as well. And they do get mended. When I first started doing this piece, I think that society was not so incredibly violent. It was very different. And now, there’s so much violence and so much destruction. So, we have to mend it.” 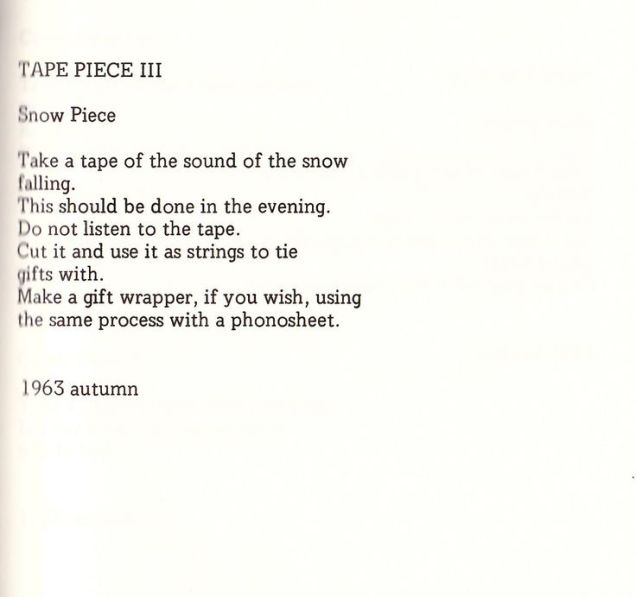 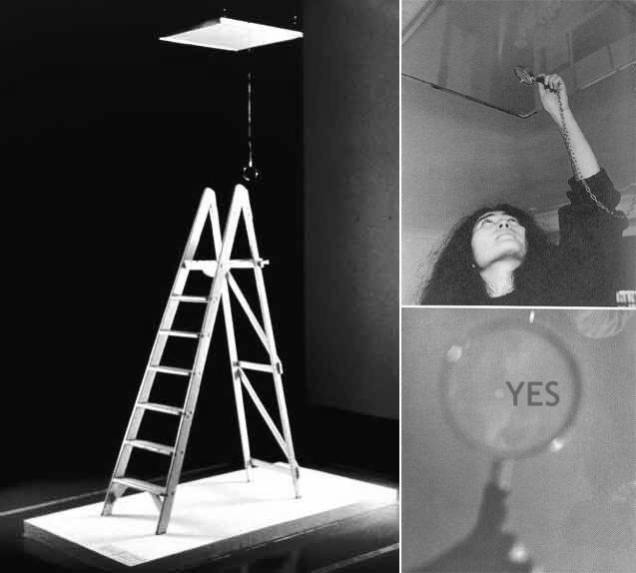 Katherine Bradford is an American painter based out of New York. Katherine’s paintings are striking in how they can at once feel whimsical, severe, and mystical. The paintings tread a line between abstraction and representation, but untimely find a freedom that fluidly bobbles between the two.

While I am inspired by Bradfords paintings they are very different then my own.  My paintings are much more grungy, duller in pallet, and more gritty in texture. My paintings also typically use found objects, which Bradford seems to have experimented with, but its not at the core of her work, where as it is in mine.

I take a lot of influence from films. One of my favorite directors is Andrei Tarkovsky.  Tarvosky is russian, his film often deal with spirituality and the metaphysical. His films move at very slow

paces, he uses long takes, and few cuts. Despite he work often depicting a grim reality, he shows the world in an enigmatic and honest beauty.

Despite most of Tarkvosky’s films taking place in Russia, the scenery reminds me much of my home Cleves. I aspire to capture the landscape with the same mystery and power that Tarkovsky does. In many of his scenes the scenery suggest something metaphysical or philosophical, this is also something I aspire to to achieve in my work.  Tarkvosky is quoted saying “The allotted function of art is not, as is often assumed, to put across ideas, to propagate thoughts, to serve as an example. The aim of art is to prepare a person for death, to plough and harrow his soul, rendering it capable of turning to good.”

Of course, the biggest difference between Tarkvosky’s work and my own is  the medium. When Tarkvosky was working with film it was relatively new, and film as art was even newer. Painting on the other hand is old. Tarkvosky believed painting was too beautiful to realistically capture life. Funny enough, I consider Tarkvosky’s films to be among the most beautiful i’ve seen.

A lot of my work deals with questions related to metaphysics. I am very interested in the idea of the soul and spirit, and how our cultural understanding of the soul relates to how we treat other people, organism, and objects. According to a new Harris poll, belief in the soul and afterlife are declining.

One idea in particular that I am interested in is Animism. Animism is the idea that every object has a spiritual essence. It is an idea that people seem to come to naturally, as many primitive cultures believe in animism. In a way it is arguably the most innate way humans understand the metaphysical world.  To further my understanding of Animism, and metaphysics in general I have been reading The Wakeful World: Animism, Mind and the Self in Nature, by Emma Restall Orr. The book is very in depth, giving a history of both the scientific and philosophical understanding of metaphysis in the western world. I suspect I will have to read the book a few times before I fully absorb all the information. I’ve linked the authors website below.